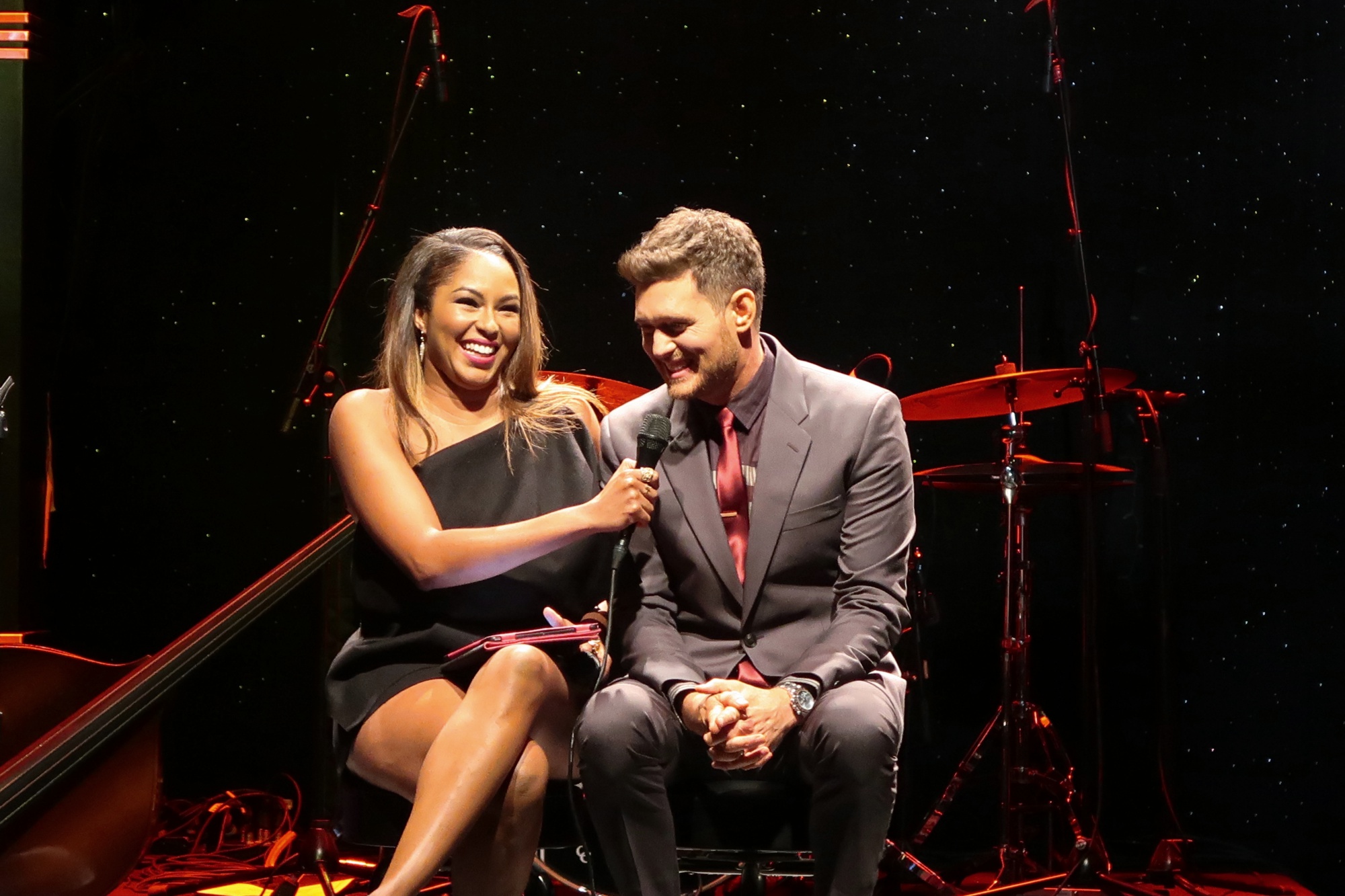 Sometimes in blogging you get those ‘pinch me’ moments where I can’t believe some of the things I get the opportunity to do. Last week when I headed to New York for an evening with Michael Bublé for his perfume launch, it was one of those moments.

Now before I get to the evening of the launch, I want to talk to you about the perfume itself. Admittedly I have never bought into the celebrity fragrance launches, you wouldn’t see me rushing out to buy the latest Britney or Lady Gaga fragrance, so I was pleasantly surprised by the Michael Bublé fragrance.

The fragrance not only itself smells luxurious and amazing, but you can really see the thought that has been put into it by the lead perfumer Karine Dubreuil-Sereni, as well as the idea behind the bottle and the placement of where the scent will be available. This is not just a celebrity fragrance, this is a new fragrance that will be able to rival those from top designer brands.

We were lucky enough to meet with Karine before the launch to find out more behind the perfume and how she began creating it. We went through each of the top, middle and base notes, to then smelling the final fragrance. It was so insightful to learn about how a fragrance can be put together. I now know I love the smell of white amber, so that would definitely be in my fragrance if I ever made one.

Karine worked closely with Michael to develop a fragrance from his likes and dislikes and wanted to create something he would be happy to have his name on. Karine said she thought about his passions and his music and what type of women would wear his fragrance when going through the creative process. It was amazing to see someone so skilled in perfumery that she would be able to know what note was not quite right and replace it with something else without even having to smell it.

Let’s move onto the fragrance, firstly I love it! It has some really musky notes on the bottom, that will linger and last throughout the day. These are white amber, cedar wood, praline and patchouli. Middle notes are more floral and include lily of the valley, rose, peony and jasmine, whereas the top notes which are what you smell first are very citrus and are bergamot, lemon and red fruits. The bottle is very elegant, with a nod to the fragrance bottles of past with the circle atomizer.

The launch party was held at the famous Edison Ballroom in Times Square, so of course I couldn’t resist a photo in Times Square in my outfit for the evening. Times Square is so busy and there is so much going on that standing taking outfit photos is probably the least weirdest thing going on.

I decided to wear a Bardot cut black pleated midi dress and sandals from ASOS and a black clutch bag from Zara. I love this bag it’s so simple but yet has plenty of room for cameras, phones etc and has a loop to put it round our wrist. I was a bit worried about wearing long sleeves in New York as it was so hot, but the dress has a fine fabric and the cut off neck made it the perfect choice.

The event kicked off with a drinks reception and then Michael having an interview with the presenter, as the event went out live on Facebook, how brilliant was that for the fans!? He talked about his fragrance and his new album which comes out in October, as well as favourite fan moments.

He then of course sang for us all, a few classics and his new single Nobody But Me, which is super catchy and no doubt will be a massive hit. He seemed really humble, charming and if not even a little nervous as he hadn’t sang in public since his throat operation. I never managed to get a picture with Michael but the signed bottle sure enough made up for that.

Michael Bublé By Invitation Eau de Parfum is available now; £29 for 30ml, £39 for 50ml, £55 for 100ml on Michael Buble. From 11th Sept in The Perfume Shop & from 25th September in other leading retailers including Debenhams.

Stay tuned for more New York adventures this week on the blog and also my New York vlog over on YouTube on Friday with some sure-fire clips of Michael singing, so head over and subscribe for that.

This post may contain affiliate links, meaning when you click the links and make a purchase, we can receive a commission.

How To Double Cleanse

Leave a message on the love wall in the Love Room

Perfect spot for lunch with a view @madisonlondon1

Hello Summer ☀️ Finally getting to wear some

You have successfully signed up to the newsletter.

Leave a message on the love wall in the Love Room

Perfect spot for lunch with a view @madisonlondon1

Hello Summer ☀️ Finally getting to wear some